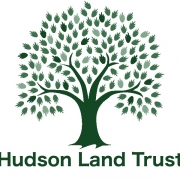 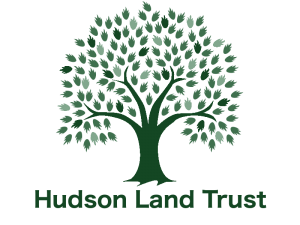 On May 19, 2020, the Members of the Hudson Land Trust held their annual meeting. Tom Green and Andy Horvitz were re-elected as Directors and subsequently as Officers, Clerk and Treasurer, respectively. 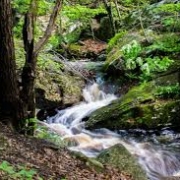 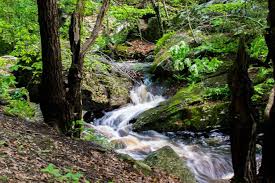 The public is invited to hike the Danforth Falls Conservation Area in Hudson, Mass., from 10 a.m. to 2 p.m. on Wednesday, Jan. 1, 2020. The walk includes picturesque views of Danforth Brook, historic stone walls, summit views west of Hudson, wildlife, a waterfall, and more.

Follow the orange ribbon on your own or join a free guided tour at 11 a.m. or 1 p.m. This one-mile loop includes uneven terrain and a somewhat steep climb up and down from the 450-foot summit, so visitors should wear sturdy footwear and be prepared for an intermediate hiking opportunity. It is not suitable for strollers.

This activity is co-sponsored by the Hudson Recreation Department and the Hudson Land Trust. Danforth Falls Conservation Area is located on Lincoln Street (Route 85) across from Bradford Road. If the small parking area is full, please park on Bradford.

Our Business Fundraising Efforts Have Begun

We are an all-volunteer organization that seeks funding to further our conservation goals. Your financial support enables us to maintain, beautify, and enhance the utilization of, the Town’s conservation properties.

In late 2018 a group of Hudson residents formed a non-profit organization (501(c)3), the Hudson Land Trust. The Trust’s principal function is to assist the Town of Hudson in the oversight and management of its conservation lands, ensuring they are preserved for future generations as intended.

We are working with the Town, partner community organizations, and the public at large on initiatives ranging from trail building and signage to community engagement and education. In the coming weeks, we will be filing conservation restrictions with the Massachusetts Executive Office of Environmental Affairs, Division of Conservation Services, a legal process that ensures the land will be protected in accordance with the Community Preservation Act.

We are an all-volunteer organization. Our Board of Directors has worked hard to form the Trust, build relationships, and get the organization off the ground. Community support for the Trust has been strong and we have been humbled by the generous financial support of our neighbors.

With a mandate to protect these lands forever and with countless opportunities to enhance their utility today, we are seeking donations from local businesses who share our commitment to natural resource conservation.

We offer supporter opportunities as follows:

We would welcome the opportunity to meet with you to discuss this further at your convenience.

Thank you for your support.

Thank you for your support! 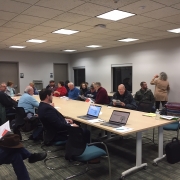 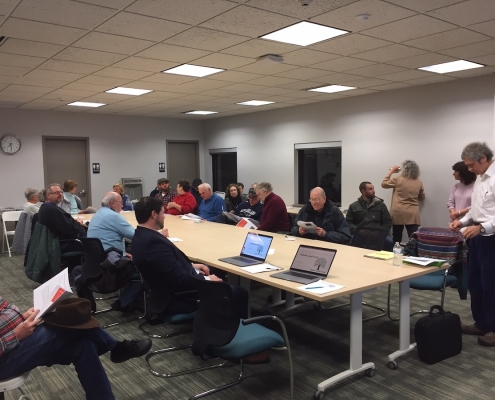 On Wednesday, January 16th, in the Avidia Bank Community Room, the Hudson Land Trust held its first public meeting. More than thirty residents attended the presentation by the Trust’s board of directors, who were joined by Pam Helinek, Hudson’s Conservation Agent, and Linda Ghiloni of the Community Preservation Committee.

The presentation covered important background information on the Community Preservation Act (“CPA”), the basis for the one percent property surtax that Hudson enacted in 2007. Since enacting the CPA at Town Meeting, Hudson has raised more than $3M and received approximately $1.25M in matching funds from the State.

Over the last decade, these Community Preservation Funds have been used, as intended and legally required, in support of various land acquisition for conservation and recreation, historic preservation, and affordable housing initiatives. It is the land acquisitions that necessitated the formation of the Trust.

Following the Board’s presentation, various members of the community, including representatives from the Board of Selectmen, Hudson Public Schools, and the Boy Scouts, offered their support for the organization and its goals. 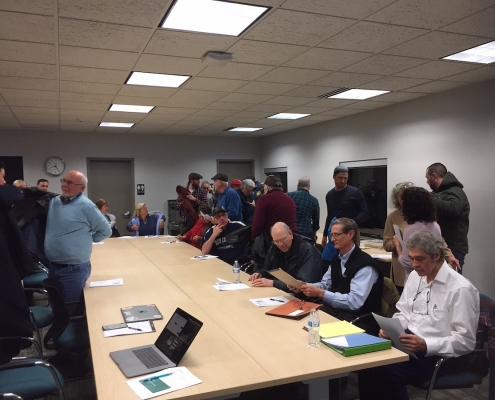 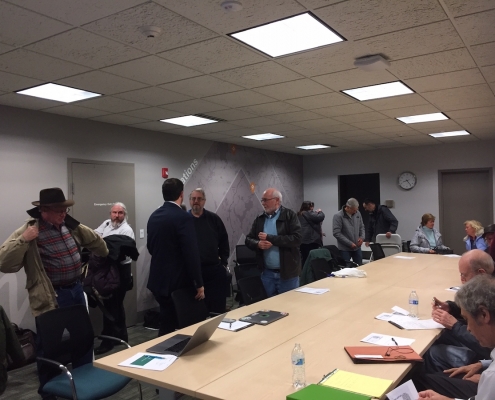 The Board would like to thank all who attended for your support and also Avidia Bank for the use of their Community Room.

The Hudson Land Trust is now welcoming members and donations. Join us, here. 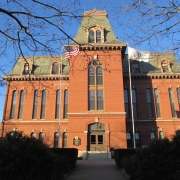 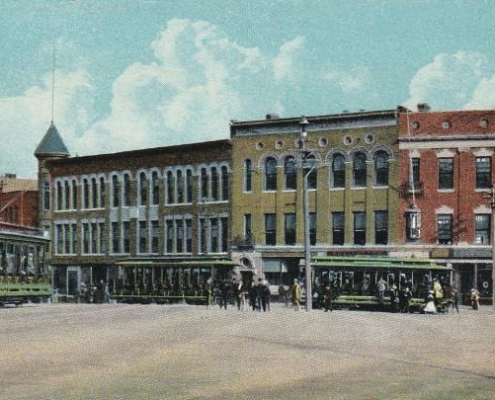 A Brief History of Hudson

Before the Pilgrims arrived in North America and established Plimoth Plantation, tribes with names like Narragansett, Ockoocangansett, Wampanoag, and Nipmuck, were living off the land, the rivers, and the lakes in Massachusetts.

Eventually, settlers made their way to Hudson as described in reference [1]:

Hudson’s recorded history began in the early 1600s, when a group of second-generation settlers, an offshoot of the Sudbury settlement, were granted land parcels. This small group of scattered residents lived peacefully with the native people until the mid-1600s, when King Philip, a Narragansett warrior tired of the newcomers’ intrusive rules, instigated a war against the European settlers. Fourteen settlements, including what is now Hudson, were burned to the ground. During the war, many tribe members, under suspicion of being sympathetic to King Philip’s cause, were moved to Martha’s Vineyard, where they lived out the war years. The original native families never returned to Hudson; the surviving family members were resettled in Natick after the war.

Before its incorporation as a town in 1866, Hudson was a neighborhood and unincorporated village of Marlborough, Massachusetts and was known as Feltonville. From around 1850 until the last shoe factory burned down in 1968, Hudson was known as a “shoe town.” At one point, the town had 17 shoe factories, many of them powered by the Assabet River which runs through town. Because of the many factories in Hudson, immigrants were attracted to the town.  [2]

The Impetus for Conservation

During the 1960s, Hudson’s population roughly doubled from 8,000 to 16,000 with a commensurate decrease in the open space. In the 1970s, a new industry came to town, when Digital Equipment Corporation built a semiconductor fabrication facility on a 160-acre former orchard on Reed Road. When planning this facility, DEC negotiated with the Commonwealth to construct a connector from Route 85 to I-290 and I-495.  (Some time later, this stretch of pavement was named the Argeo R. Cellucci, Jr. Highway. “Junior” brokered the deal in his role as chairman of the Industrial Development Commission.) A shopping center on Technology Drive and a  Walmart store on Rt. 85 were developed in the following decade, thus continuing the consumption of open space.

To my astonishment, a conservation parcel was acquired by the Town in 1901 (Fosgate Lot on River Road).  Sixty-five years elapsed before the Morse Lot was purchased. In chronological order, here are the lands acquired and held by the ConservationCommission.

This is a total of 14 properties covering 185.4 acres.   (The details are available in reference [4].) The impact of development and legislation, such as the Community Preservation Act, can be correlated with the acquisitions. The generosity of Hudson’s landowners also cannot be overstated.

Purpose of the Hudson Land Trust

From the official Bylaws [5], the succinct purposes are to:

Please see reference [5] for the complete language regarding the purpose and other aspects of the bylaws.

The Hudson Land Trust organized in August held their first official board meeting in October.  Our goals going forward are:

From the Native American tribes to the colonial settlers on down to the modern residents who carry a computer/telephone/camera in their back pocket, a significant element of our commonwealth has been the land.  It is our duty to be stewards of the land, née environment, to preserve it and share our bounty with future generations.

If you are so inclined, please join us and become a member of the Hudson Land Trust.

Five Residents Form a Board of Directors

As the Town has acquired land resources under the CPA, the State requires that the conservation restrictions (CRs) on the properties be held in a trust. Regional trusts, like the Sudbury Valley Trustees, offer this service for a fee, generally between $12,000 and $25,000. The founders of the Hudson Land Trust believe we can offer more value to the Town and community while charging lower management fees.

Five conservation-minded residents have volunteered to drive the formation of the legal entity – a 501(c)3 nonprofit corporation – and to serve on its board. We are:

We have filed our registration paperwork with the State of Massachusetts and the IRS. Once we receive the necessary approvals, we can begin working with the Town on conservation restrictions, start fundraising, solicit volunteers, and commence our land stewardship responsibilities.

Thank you for your support. 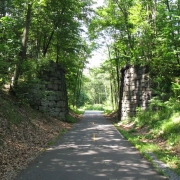 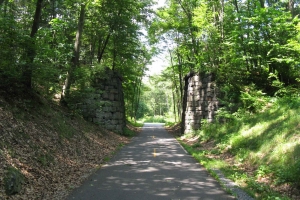 Having purchased land for Open Space preservation using CPA funds, the Town of Hudson needs a land trust to hold their conservation restrictions.